It is the high majority of women in the garment industry that show its true nature.

Gender influences labour practices in countless ways: ideas about the jobs women can do, how they should do them, their wages, their relationship to employers and the law. Everything from the level of payment and how quickly a worker is paid, to the terms of your employment, such as lack of a contract, no medical or maternity leave, no right to organise, or no pension, down to the way a supervisor speaks to or touches a worker,is informed in part by gender-based notions of what is acceptable. Detailed factory profiles reveal that at the factory level, women workers are concentrated in subordinate roles, such as machine operator and checkers. Women are routinely employed in low skill level roles and rarely reach leadership positions in their factories or unions.

"I come home, and I can't sit until evening. I need to cook, wash laundry, write homework with kids... In the evening I'm so tired that I just try not to fall before I lie down."
A Worker from Croatia

Women face stress created by job insecurity, verbal and physical harassment, malnutrition from low pay, exhaustion resulting from forced overtime, and the inability to do anything about unsafe working practices and environments. Women’s rights are also violated outside the workplace. That cannot be ignored as it shapes the reality of who a woman worker is, both in and outside the workplace. Discrimination in terms of double workload (productive and reproductive), discrimination in the community and in the home, discrimination before the law (in the shape of regulations regarding property ownership, inheritance, etc.), these are all factors in creating the context in which a woman lives and works. She doesn’t shed these aspects of her reality when she enters her workplace. The roll-out effect on a woman’s health and that of her children is immediately evident.

When looking at the garment sector, the division of work is very much gendered: The further down the supply chain you go, the more precarious the work; the lower the pay, the greater the share of women workers. Employers are able to take advantage of cultural stereotypes that depict women as passive, flexible, and less likely to challenge management. Women are typically paid less than men because their income is seen as complementary to those of male breadwinners. In reality, however, women workers often represent the sole income providers for the household. This form of inequality is most clearly observed in the difference between men’s wages and women’s wages, often referred to as the ‘gender pay gap’. Women are often paid less than men in the clothing industry, even if they do the same tasks. 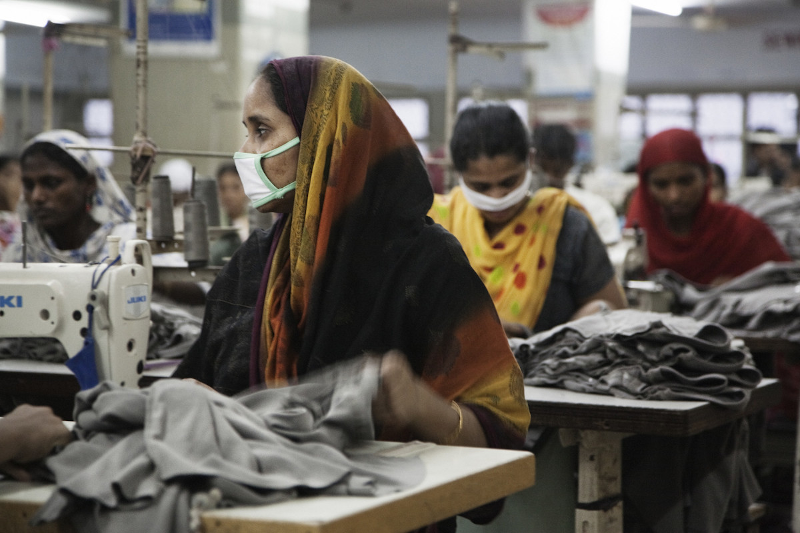 "Women can be made to dance like puppets but men cannot be abused in the same way. The owners do not care if we ask for something, but demands raised by the men must be given consideration. So they don’t employ men."
A worker from Bangladesh

Since women are mainly employed in lower-paid and lower-power positions they are more likely to be affected by poverty. Poverty in turn increases the likelihood of becoming a victim of violence and harassment. Gender-based violence and harassment are most common in industries where women are paid low wages and have little decision-making authority. The textile industry, with the structure of its supply chains, is one of these industries that structurally encourage violence and harassment. As the majority of the workforce is female, including many young women and migrants, the majority of garment workers also do not have any power to improve their situation.They are in a relationship of dependency with mostly male superiors who are often also their abusers.

Gender-based violence is both a cause and a consequence of poverty and gender inequality. GBV ranges from gendered discrimination, such as lack of access to maternity leave and childcare, to brutal physical violence such as rape or murder. A recent report on GBV in Bangladesh found that 76% of all interviewed workers had faced some form of GBV at the workplace. When looking at all cases of GBV, sexual harassment is the form of violence that workers experience most often. When analyzing physical violence, slapping was the most common form of physical violence, experienced by 80% of workers. Workers report that getting slapped by supervisors is especially common when production targets are high and / or deadlines are tight. The other most common forms of violence are beating (44%), kicking (42%) and punching (11%). While domestic violence is clearly one of the most prevalent form of sexual violence against women, out of those interviewees who have experienced rape, a shocking 6% were raped by their supervisor or line chief.

Despite its prevalence in the garment sector, GBV mostly does not show up in factory audits since the format of classic audits does not involve workers to a degree that would allow them to speak about such sensitive issues. Interviews with workers often happen on-site, sometimes even in the presence of male superiors who are potential perpetrators of GBV. 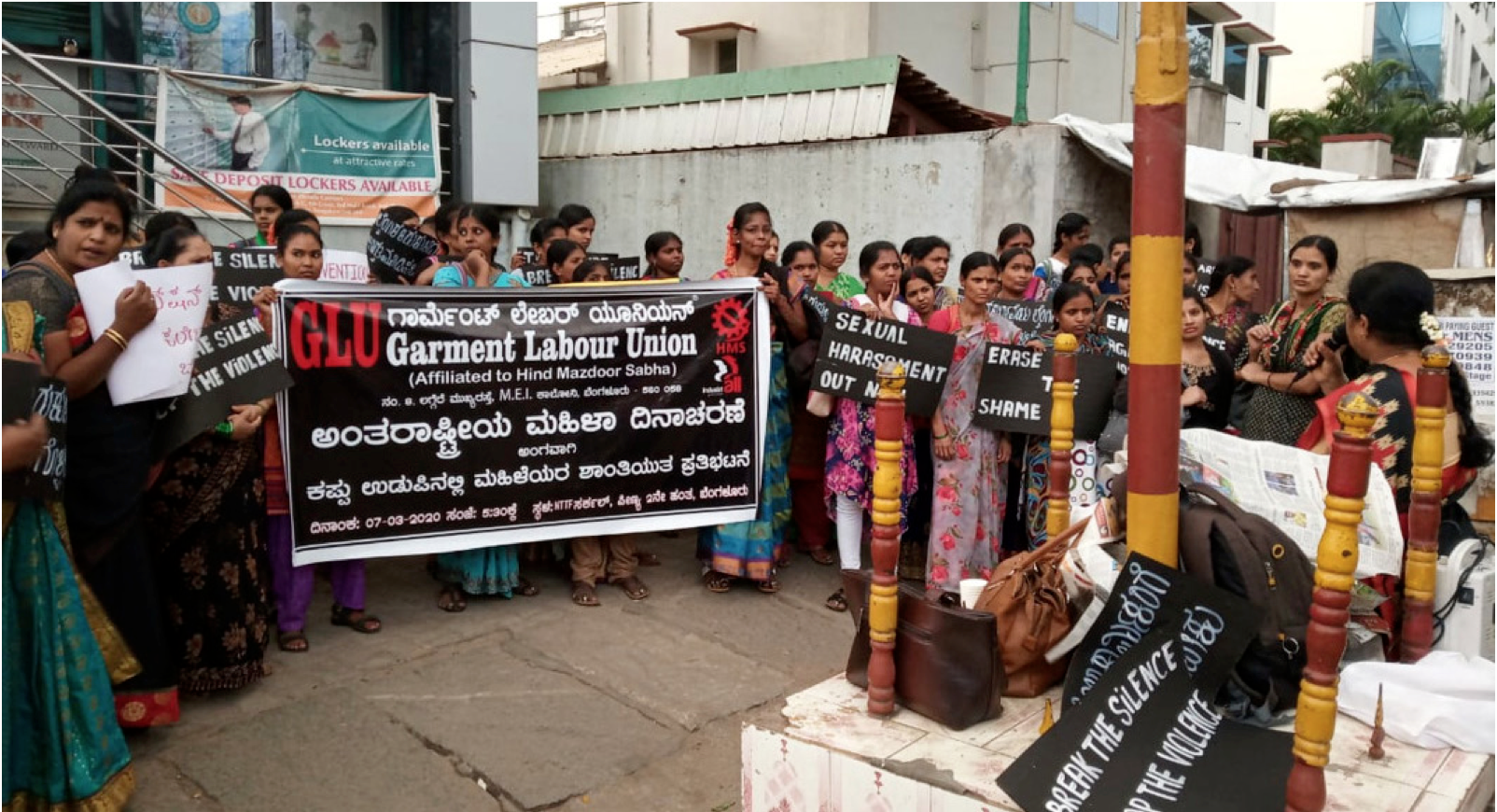 To address gender-based violence in the supply chain, brands need to understand and recognise their own role in the dynamics that lead to gender-based violence. Recent studies show that buyers increasingly use their leverage over suppliers to demand lower prices, shorter lead times for higher production quantities, and sudden changes to orders. As a result, suppliers increase workers production targets which lead to an increase in violence and harassment towards workers when targets are not met.

This is confirmed by the evidence from Bangladesh: 64% of the respondents in the present study stated that they were under tremendous pressure to produce garment products and 35% of them stated that they had experienced violence from their supervisors for that reason. Other stakeholders in the industry found the same dynamics when analyzing violence and harassment in garment factories. Fair Wear Foundation states that production pressure - including price pressure and lead time pressure - is linked to violence and harassment in several ways: For example, evening overtime hours can make women workers vulnerable to sexual assault, in the factory as well as on the way home. Supervisors who are stressed by high production targets are more likely to abuse workers. Moreover, if bonuses are linked to production outputs, workers are more easily pressurized into sexual favors to supervisors in exchange for approving targets.

"We are verbally abused at work. There should be female supervisors with female workers, and we need better pay so that we can look after our children"
A Worker in India

When you are living pay check to pay check, quitting the job that protects you from starvation is not a realistic option. Especially when you have multiple mouths to feed. Brands need to do more to ensure the women in their supply chain are protected from abuse and work towards a living wage for ALL workers.